Modification of Date of Birth

8t1mngr2022-03-06T15:08:17+01:00
The Nigerians in Diaspora Association, Marseille under the leadership of Mr. Shina Olaoye hosted His Majesty, Olofin Apesin Olode, Olota of Otta, Awori Kingdom, Oba Professor Adeyemi Obalanlege(Lanlege Ekun II, Arole Iganmode) on Friday, 4th March 2022 in Marseille.
The President of the Association, M.r Shina Olaoye made it known that it is a great achievement for the association to have His Majesty in Marseille.
According to him, the presence of Kabiyesi has further boosted their morale as he promised Kabiyesi and other Nigerians that they will continue to promote the positive image of the country in Marseille.
He also seized the opportunity to inform His Majesty of their programs for the year as they look forward to receiving many dignitaries during the events.
In his remarks, His Majesty, Oba Obalanlege  thanked members of the association for the reception, urging them to continue to raise the flag of Nigeria in accordance to the rules and regulations of their host country.
Kabiyesi also charged them on the need to look back home, stating that with their experience in Europe, they have the opportunity to replicate modernism in the governance and political sector of Nigeria.
Contributing, Olori Oloruntoyin Obalanlege implored members, especially the married, not to abandon their families at home.
In his continued effort to promote the rich cultural heritage of the Aworis, His Majesty, the Olofin Apesin Olota embarked on a tour to Germany and other European countries on the 24th of February and he is slated to return 6th March 2022.
#KabiyesiOlota
#ProsperousOttaKingdom
#AworiToTheWorldProject
#EuropeTour
#LiberationContinues
Prince A.S Olusesi reporting from Marseille
For: The Royal Palace of Oleta of Otta, Awori Kingdom
March 6, 2022
Read more...

8t1mngr2022-02-28T07:48:50+01:00
POLAND BORDER CROSSING
Dear Nigerians, In light of the recent invasion of Ukraine. Please be advised that for all Nigerians crossing over to Poland through this Border Border crossing Korczowa – Krakovets Please present any one of these as your destination address with the Border controls.     The NIDOP Volunteers with the Nigerian Embassy staff will be at the below meeting point with Buses and Vans to pick up Nigerians. Please Stay Safe.

We will be waiting at the below address. This is our convergence point. It’s about 100m – 200m from the Border. Please meet at Hotel Cykada https://maps.app.goo.gl/iBneuuLpgrmVqMGD8 Please fill out the form below  Please join the telegram group https://t.me/+eR4Omk33V01jMWQ0 NIDOP Executives.
ROMANIA BORDER CROSSING
The Nigerian Embassy in Romania wishes to inform Nigerians arriving from Ukraine that arrangement has been put in place to receive them at the Romanian entry points. The Embassy hotlines are: Consular Officer +40747309174 Head of Chancery +40786091964. For those experiencing difficulties at the borders, Our Minister, His Excellency Geoffrey Onyeama is currently engaging high authorities and the Organization for Migration to assist.
February 28, 2022
Read more...

8t1mngr2022-02-22T09:40:48+01:00
The High Commission wishes to inform the Nigerian Community in Australia, New Zealand, Republic of Fiji, Papua New Guinea and Vanuatu of the official commencement of registration and enrolment of the National Identification Number (NIN) in the above countries. Please be informed that the National Identity Management Commission (NIMC) in collaboration with the Dannon Investment and Management Consultancy (Dannon Group) and EH-LED Global Resources Ltd, represented by Commscentric Pty Ltd, would be carrying out this exercise in Australia and countries of concurrent accreditation.

Applicants will need to fill out an online application at DANNON Group and forward a copy of the application and proof of payment to [email protected] in order to obtain an appointment. Please note: The automatically generated appointments are NOT valid. You will receive an email with the appointment date in due course.

Applicants will need to fill out an online application at NIN Booking and follow the instructions as directed.
February 22, 2022
Read more...

8t1mngr2021-12-23T09:54:58+01:00
The Federal Government has introduced a suite of digital Tokens to replace the ageing NIN slip and polycarbonate card. The Minister of Communications and Digital Economy, Isa Pantami said this at stakeholders workshop on the National Identification Number (NIN) Tokenization Solution organised by National Identity Management Commission (NIMC) in Abuja. He said the government adopted the solution to ensure the privacy of Personal Identifiable Information of individuals during verification transactions and to reduce incidences of illegal retrieval, usage, transfer, and storage of NIN. The Minister who was represented by the Director-General of NIMC, Aliyu Abubakar said the full implementation begins on Jan. 1. He said the tokenisation solution was customised to protect Personal Identifiable Information and to protect the sanctity as well as the sensitivity of the NIN issued by NIMC to registered individuals. “One of the benefits of the virtual NIN is to ensure no third party may carry out any verification, hiding behind a proxy (and without the knowledge of the NIMC, being the Custodian of Identity). ” And also generated Token or Virtual NIN is unintelligent, completely random with no correlation to the NIN and cannot be reverse engineered, even by a Quantum Computer. “The NIN holder is the only exclusive issuer of NIN and cannot be delegated, “Pantami said. He said anonymization was also catered for with the attachment of the UserID of the verifier to every verification request, adding that no NIN, no verification. Pantami said NIN tokens are MDA or merchant-specific and expire after a set period, saying that a token generated for company A cannot be utilized by company B. Abubakar said that the programme aimed to rub minds with stakeholders to ensure understanding of the product and buy-in by all. “We must continue to reinforce the need for every Nigerian to have a digital identity, irrespective of social class or economic status, improve access to all and ensure continuous protection of privacy and data of our citizens and other enrollees. ” We must sustain the momentum by creating continuous awareness programs and sensitizing of the public. Also speaking, the Technical Consultant of NIMC, Mr Tunji Durodola said the Digital Token was designed to replace the 11-digit NIN for every usage for everyday usage. He said NIN had been shared and stored by various entities mostly without the knowledge consent or consent of the ID holder or the custodian of identity in Nigeria, NIMC. Durodola said the improved NIN slip had a smaller form factor and is available to all who have been issued an active NIN, saying they may be purchased without having to visit the NIMC office. “Some of the pre-requisite of tokenization, one needs a NIN issued by NIMC, the mobile number registered in Nigeria and linked to your NIN,” he said. The NIMC Director Legal, regulatory and compliance services, Hajiya Hadiza Dagabana said there was a need for sensitization of the public. She said that the tokenization would be properly disseminated in various local dialects for better understanding. The News Agency of Nigeria (NAN) reports that Tokenization consists of 16 Alpha-numeric characters. starting and ending with two letters of the Alphabet. It is issued by an ID Holder, either via the NIMC MWS Mobile ID apps or via USSD on a feature phone and only by the NIMC, while a mobile number linked to NIN is required to participate. A minor Number linked to a NIN is required to participate. Source
December 23, 2021
Read more...

How to Print Your Improved NIN Slip

8t1mngr2021-12-21T06:54:21+01:00
You can print out and even laminate your Improved NIN Slip in plastic now and keep it as a handy physical means of identification that fits easily into your pocket, purse or wallet. The QR code on the Slip makes it easy for its authenticity to be verified by other people scanning it using the NIMC MWS Mobile ID app on their phones. 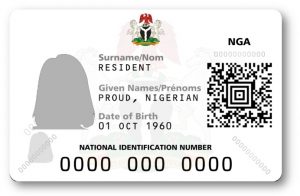 Take care not to leave copies (photocopies, image scans, and so on) of your Improved NIN Slips with anyone else otherwise you leave them with copies of your NIN and verification QR code as well.

Downloading and Printing the Slip

There are two types of NIN Slip – Premium and Standard – which you can print from your dashboard.

If you get an error message that says “UserID does not exist” when you try to log into the portal, you can resolve the problem by following the steps below: Learn more about Mobile Digital ID >>
December 21, 2021
Read more...

Why you MUST have the National Identity Number (NIN)

8t1mngr2021-05-14T23:45:38+01:00
1. The NIN is internationally recognized as Nigeria's Social Security Number for every Nigerian citizen 2. The NIN captures all details about you and will be a local and International recognized means of Identification for Nigerians 3. It is Compulsory for every Nigerian to be identified with a NIN 4. You cannot get or renew a Nigeria International Passport without NIN 5. You will not be able to open a Bank Account in Nigeria or conduct any transaction without NIN 6. The NIN is linked to International Security networks which makes it possible to locate the holder or in tracking fraudulent activities. 7. Only holders of NIN will be considered for voting in future elections 8. NIN will be used in calculating and building an accurate database of Nigerians living in the Diaspora 9. Every child of Nigerian descent is entitled to be enrolled to have a NIN The good news is that you and your family can now enrol for NIN in Sweden thereby eliminating the logistics and cost of travelling to Nigeria for the enrollment. To learn more, you are invited to participate in an interactive Webinar holding on as follows; Date: 15th May 2021 Time 20:00hrs (Nigeria)
May 14, 2021
Read more...

You can find out more about which cookies we are using or switch them off in settings.

This website uses cookies so that we can provide you with the best user experience possible. Cookie information is stored in your browser and performs functions such as recognising you when you return to our website and helping our team to understand which sections of the website you find most interesting and useful.

Strictly Necessary Cookie should be enabled at all times so that we can save your preferences for cookie settings.

If you disable this cookie, we will not be able to save your preferences. This means that every time you visit this website you will need to enable or disable cookies again.